Materials of the Future

It’s better to implement ideas than to simply dream of them.  And that’s exactly how the developers of Porsche proceed:  The seemingly impossible becomes tangible technology.
At first glance, innovation may not be apparent.  Philipp Kellner has placed a pressed sheet steel component on the table.  It will later be affixed to the vehicle’s sill, accommodate the door hinges, and enclose the front windshield on its vertical side, as explained by the Porsche expert from the Structure Predevelopment department in Weissach.  This component is the A-pillar, the first important vertical element of a vehicle body as seen from the front end.  Together with the B- and C-pillars, it comprises the passenger compartment and is thus a critical safety component.  The A-pillar provides the survival space for passengers in a vehicle rollover, especially for open vehicles such as convertibles and roadsters.  The thin-sheet steel profile contains a second profile made of high-strength steel that’s thickest at its center and tapers at the ends.  This unassuming piece of metal represents engineering acumen of the highest order. 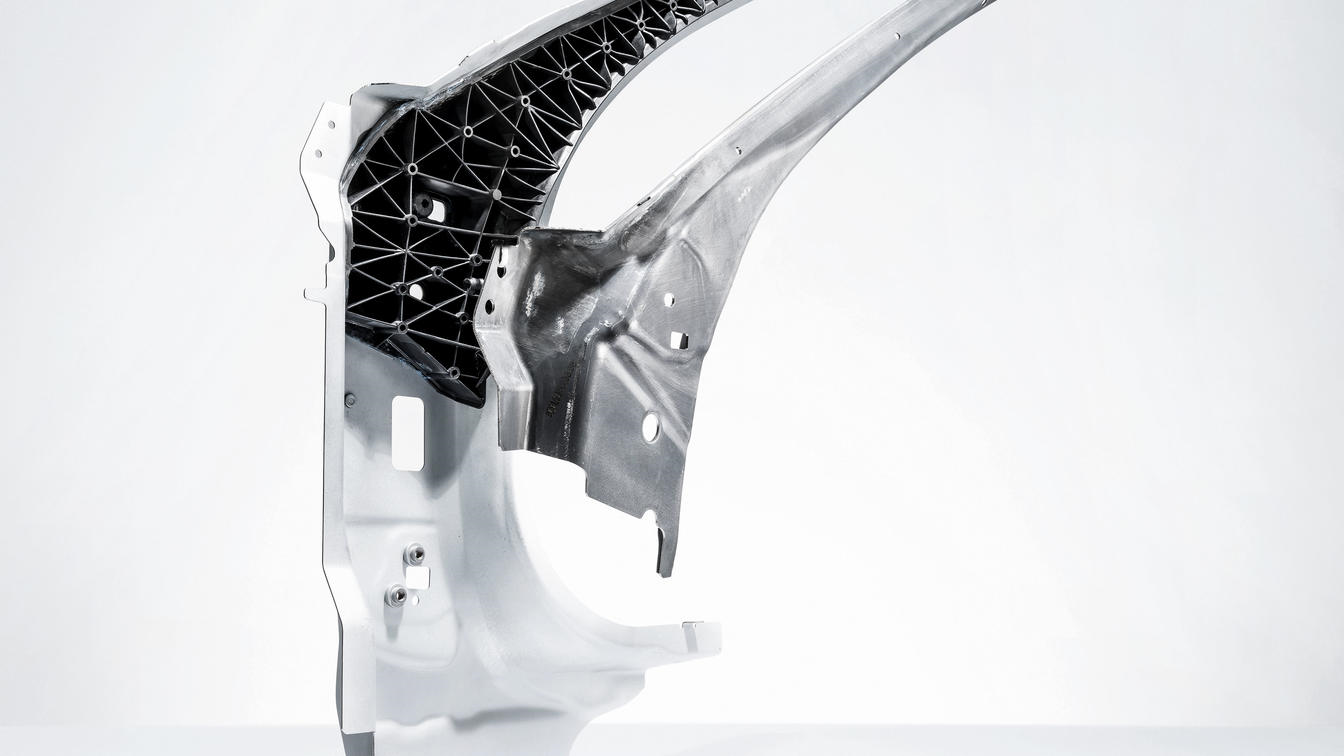 3-D Hybrid A-pillar:
An insert of high-strength steel, clad in molded thermoplastic glass-fiber fabric panels and encased in plastic reinforced with short glass fiber, replaces the traditional steel pipe.  This enables the A-pillar to withstand rollovers just as well – at a significantly lower weight.  With the optimized brace structure made of plastic ribs, it doesn’t buckle but instead yields elastically and springs back.  Before the year is out, research into this new technology will wrap up, removing the final hurdles to its being used in the Porsche lightweight body of the future.
The invisible backbone
Black plastic with rhomboid struts encases the high-strength metal and braces it from the inside.  “What you don’t see here,” Kellner elaborates, “are the two additional layers of thermoplastic glass-fiber plastic panels between the liquid injected, short glass fiber-reinforced plastic and the metal.  We call them organic sheet composites.”  Taken together, the result is the 3-D Hybrid A-pillar, a novel type of hybrid design invented by Porsche.  The advantage:  like the high-strength steel A-pillars of today’s convertibles, it doesn’t buckle in the event of a rollover and performs just as well while weighing over five kilograms less.  “The lightweight body of the future combines different lightweight materials such as high-strength steel, aluminum, magnesium and carbon fiber-reinforced polymer.  New hybrid designs will play a role as well,” says Mathias Froschle, director of the Structure Predevelopment department.  Occupant safety is the paramount concern at Porsche.  The 3-D hybrid construction concept contributes to safety – and is lighter and barely more expensive than all other solutions to date.
The basis of this research can be seen by any driver of the 918 Spyder and the current Panamera simply by looking at the brake pedal.  The naked eye will spot black fibers.  Carbon fiber, one might think.  But Edgar Grundke from Pedal and Actuator Development at Porsche knows better.  “Those are thermoformed glass-fiber panels on a glass fiber-reinforced frame.”  So, precisely the same stuff that promises to offer great strength in future A-pillars.  “The material is homogeneous, lighter than metal, and permanently stable,” explains Grundke.  “Until now, no one has dared use it in series production.  We’re the first manufacturer worldwide to do it this way.”  In the future, the new brake pedal will be used in other models.  There’s unmistakable pride in his voice as he says it – Porsche courage that has paid off.  That’s confirmed by Hendrik Sebastian as well, who works in the Innovation and Predevelopment Management department in Weissach.  The department not only functions as a point of connection for threads from the predevelopment departments but also develops new ideas for the future, evaluates and initiates research, and observes trends.  The questions addressed by this department are something like a glimpse into a crystal ball.  What will the customer want in five, ten even fifteen years?  What technologies will exist then?  It’s not all abstract thinking and imagination that are called for here, but also perseverance along the way to final implementation.  Porsche developers follow a clearly defined maxim:  “Excellent driving performance in all driving situations.  After all,” says Sebastian, elucidating one of the department’s goals, “with our sports cars, we’re always operating at the threshold of what’s technically possible.  New material and production concepts are indispensable here.  They’re the only way for us to ensure that we can generate long-term added value for our customers.” 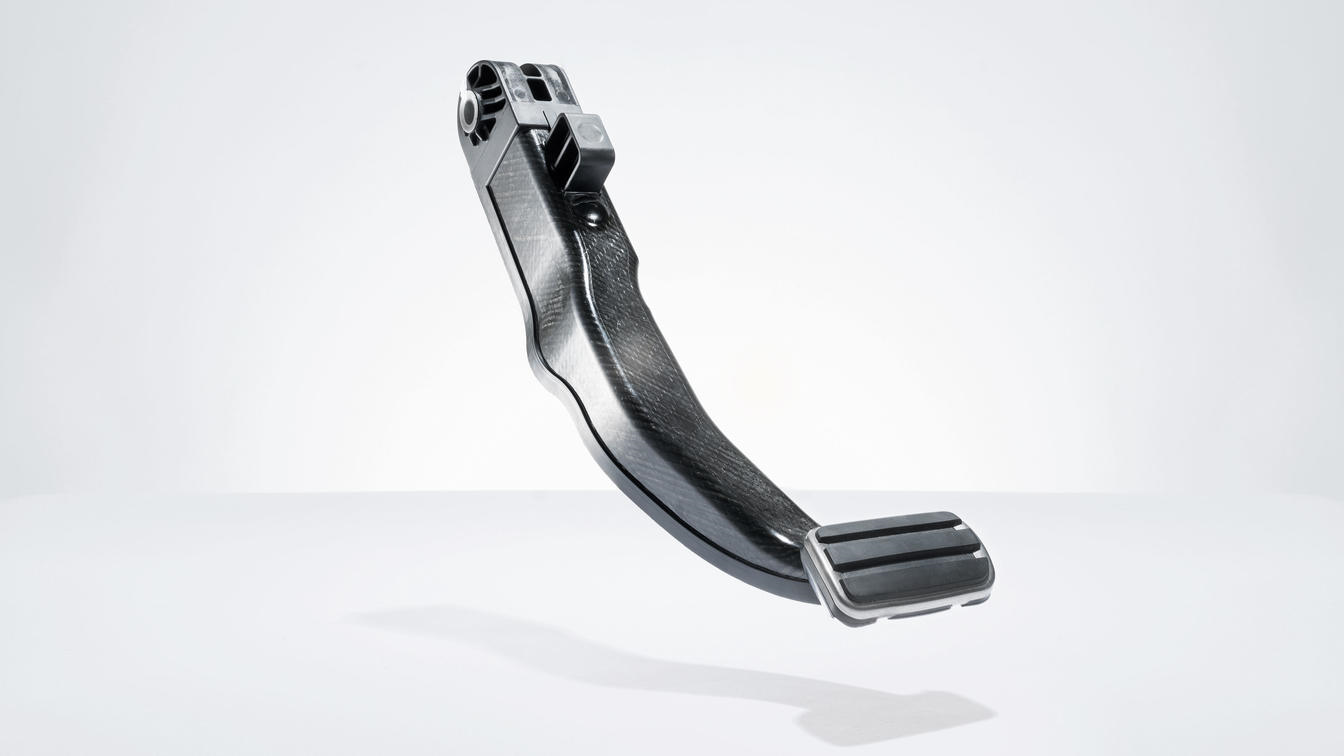 Brake pedal:
What may soon be found in the A-pillars can already be seen in the footwells of the current Panamera and 918 Spyder – the brake pedal is constructed of precisely the same thermoplastic composite.
In questions concerning the selection of material and possible production methods, the development experts are supported by their colleagues in the Material Technology department under the leadership of Stephan Schmitt.  Unconventional thought is a prerequisite in that process.  For example, most smartphones utilize Gorilla Glass, a high-strength, thin glass with perfect optical properties.  “For the first time in the 918 Spyder with the Weissach package, we used a small window of a similar material:  a laminated glass pane made up of two thin glass sheets with a film between them.”  Markus Schulzki from the Structure Predevelopment department holds a glass pane that’s roughly twenty centimeters square:  the rear window between the roll bars behind the seats of the sportiest 918.  It’s surprisingly light.  If one taps it, it sounds like plastic.  “That’s what everyone thinks,” says Schulzki.  “But it’s glass.  This here was a practice run.  Today we’re far beyond that stage.”  In the current Porsche 911 GT2 RS and 911 Carrera T, the rear windshield and side windows are completely made of thin-sheet glass, which, thanks to the initiative of Porsche, is now available in curved panes.  Until recently, that wasn’t technically feasible.  The glass is less than two millimeters thick, yet roughly 40 percent lighter and more than twice as resistant to rock impacts.  Then there’s the nearly 100 percent protection against UV rays, much improved thermal protection, and better noise protection.  “High frequencies generated by the headwind are filtered out.  Low frequencies aren’t.  The spectacular sound – for instance, that of a flat-six engine – is perceived that much more clearly,” says Schulzki, unabashedly conceding his preference for classic engines.

Finest stainless steel powder:
Complex shapes were once a matter for the foundry.  But now so-called additive manufacturing methods are revolutionizing thinking:  a laser melts powder into practically any shape, layer by layer.
Glass revolution in the interior
With the smartphone, the communication technology of the automotive industry has delivered a material that can also be used as a carrier of information in the vehicle.  In addition to exterior components, Mathias Froschle and team also develop interior solutions.  His vision:  “A center console whose sweeping surface is entirely made of thin-sheet glass.  Thanks to the film, you can create displays and control elements as precisely as the driver and passenger need them.  Gesture control is used to activate the menu, and confirmation that a command has been executed is received via haptic feedback through contacts in the glass.”
Hendrik Sebastian and his colleagues can imagine other uses as well:  “Completely new forms, discs and displays with augmented reality display features.  The passengers see an old castle through the window, tap the glass surface, a side camera captures the castle, compares the image with information from the Internet, and delivers it in real time on the window next to the actual castle.”  The film between the glass layers functions as a sreen – this is no figment of the imagination, but the current state of research.  Graduated darkening of the windows depending on the intensity of sunlight or passenger preferences is also possible.

Rotor shaft:
With traditional production methods, the core of an electric motor would consist of multiple parts.  Laser melting enables fine ribbing in the interior with minimal material usage.  A rotor made in this manner is significantly lighter.
Porsches made of plants
Porsche is also looking into interior elements made of renewable materials.  “There are already door panels made of plant fibers, but they haven’t, to date, fulfilled the requirements we have as a premium manufacturer,” says Froschle.  But Porsche will soon have components that are undeniably up to snuff.  “Even in 2048, you won’t find a model made entirely of algae or plant fibers, but the topics of sustainability and recycling will become significantly more salient,” Sebastian asserts.  “In addition to innovative materials, it’s important to tap other new production methods, such as additive manufacturing.”
Additive manufacturing is the method popularly known as 3-D printing and the specialty of Falk Heilfort and Frank Ickinger from the Powertrain Predevelopment department, who present a cylindrical component for consideration.  It’s the rotor shaft of an electric motor, and is responsible for transferring the electromagnetically generated torque to the gearing – the crankshaft of an electric motor, so to speak.  “This rotor shaft consists of a special stainless steel,” explains Heilfort.  Next to the shaft there’s a tiny glass pipe with a gray, fine powder:  the microscopically fine-grained base material of the solid component.  In a clean room, this powder is spread in a thin layer on a surface and then melted with a laser to form a firm bond, after which the next layer of powder is applied and once again melted with the laser.  Layer by layer.  Thus emerges a roughly fifty-centimeter-long rotor shaft out of the powder.  The advantage over a conventionally milled and turned component:  much less material is used, the excess powder can immediately be put to use, and it enables more complex forms.  The rotor shaft thus has fine ribbing on the interior, which lends greater strength. 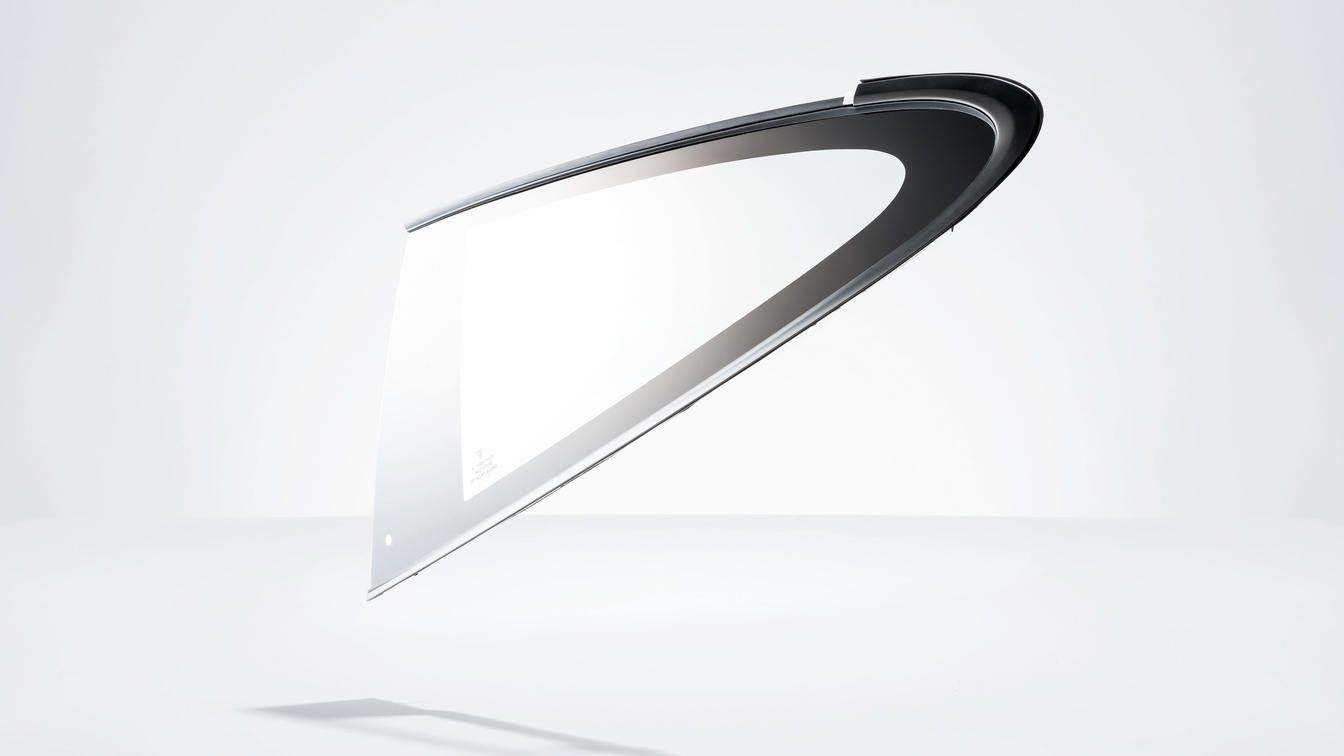 911 GT2 RS side window:
Curved in all dimensions, the high-strength side window of the Porsche GT2 RS – seen here in a prototype stage – not only improves the power-to-weight ratio but also filters out wind noise.  All while being 40 percent lighter.
It wouldn’t be possible to produce such shapes on a lathe.  It would be necessary to first cast the shaft and then weld it to get the same result.  “This component is much stronger, much lighter, more rigid and delivers much better power transmission,” says Ickinger, rattling off the benefits.  The disadvantages so far:  “It still takes about thirteen hours to print such a rotor.”  Series production is therefore not yet planned; and yet, this technology will one day revolutionize powertrains.  Hendrik Sebastian adds, “Additive manufacturing is revolutionizing the way in which we develop components.  we can optimize and test much more rapidly and also significantly enhance performance.  It’s an outstanding product and process innovation whose potential is far from exhausted.  Many challenges are yet to be mastered, but we wouldn’t be Porsche if we didn’t do exactly that.”  One such product and process innovation is exquisitely curved cooling ducts in the middle of a part.  Heilford is also certain that “what we’re researching here will soon lead to even more compact engines with improved performance.”

Gorilla-Glass:
The idea of high-strength, thin-sheet glass originated in the design of displays for cell phones and laptops.  Porsche is the first carmaker to make extensive use of this composite glass made of sand, recycled glass and safety film.  More and more new models will be equipped with thin-sheet glass, which is stronger and lighter, offers better UV protection, and could provide display functionality in the future as well.
While there will not yet be a renewable Porsche, nor a 3-D printed sports car, in 2048, a Porsche will be made of many homogeneous materials perfectly adapted to their respective purposes.  Steel and aluminum will be increasingly augmented and improved by materials that enable advancements in every dimension.  This will require vision, ambitious research, and the courage to try new things.  Qualities, in other words, that are already abundant in Weissach today.