The Original Porsche Crest as a Quality Seal

This unmistakable and sought-after icon has an unusual history concerning the original and the “fake”. To remove all ambiguity, the experts at Porsche Classic delved deep into the history of the crest, which was first suggested as a quality seal for the 356 at a meeting between Ferry Porsche and US importer Max Hoffman back in 1952. In the same year, advertising manager Herrmann Lapper and designer Xaver Reimspieß produced a preliminary design that is still used to this day with just a few minor differences in detail. Reimspieß, who is also said to have designed the Volkswagen logo in 1936, sketched a magnificent crest that symbolised the roots of the company as well as the dynamism and quality of its products. At the centre of the golden plate, the horse of the official Stuttgart coat of arms is depicted along with the name of the city. The composition is surrounded by the red and black state colours and the stylised antlers from the crest of Württemberg-Hohenzollern. The all-encompassing Porsche logo acts as a protective “roof” over all the design elements.

In contrast to the current crest, the Porsche logo on the original crest was only embossed and was not black. In addition, the red elements of the crest were actually more orange in colour to reflect the Württemberg-Hohenzollern state colours. The Classic experts charged with reproducing the crest went a lot further than merely ensuring that the colours were true to the original. The crest is produced using special tools based on original drawings. As with the original, it is gold-plated and the colour and enamelling are meticulously applied by hand.
The traditional Porsche Crest has had to undergo extensive quality testing. This involved an alternating climate test at the Porsche Research and Development Centre in Weissach, for example, and a stone impact simulation carried out at a ballistic firing range. All of these challenging tests were passed with flying colours.
The Porsche Crest passed these challenging tests with flying colours, thus proving its credentials as a genuine quality product, 100 per cent “Made in Germany”. This symbol, steeped in history, signals a continued long life for classic Porsche models.
Production of the Porsche Crests
The Making of the Crest by Porsche 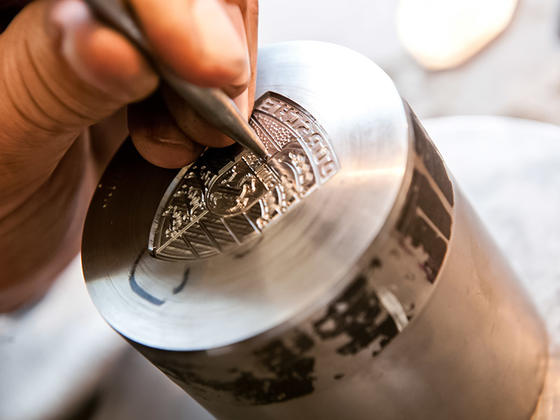 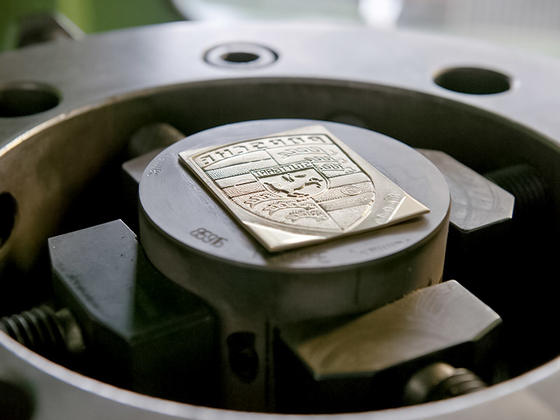 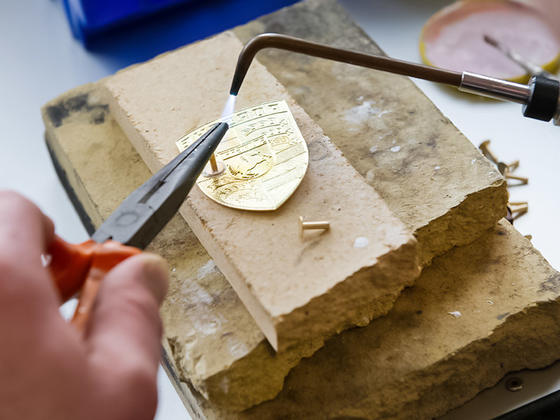 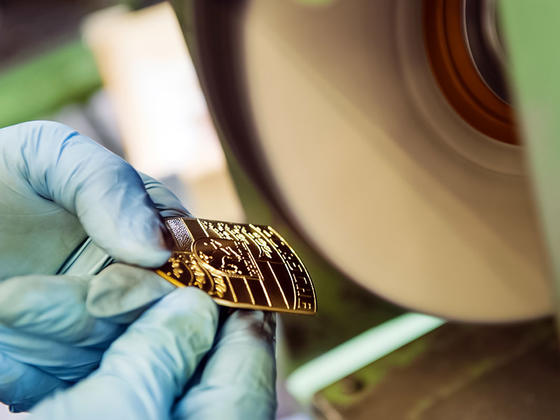 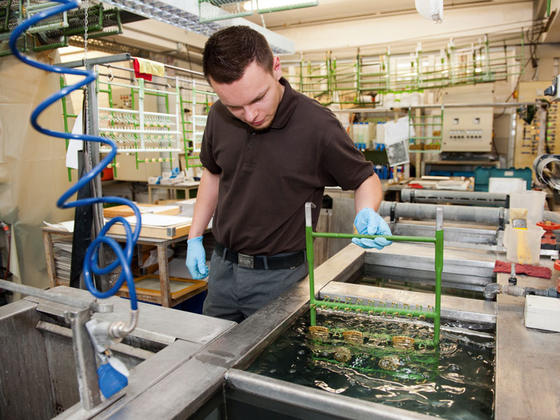 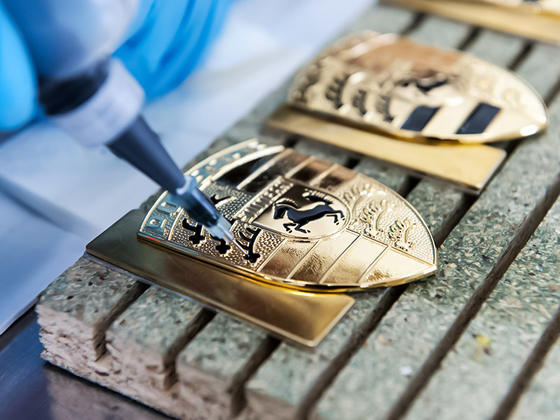 6.  Applying the enamel coating to the crest 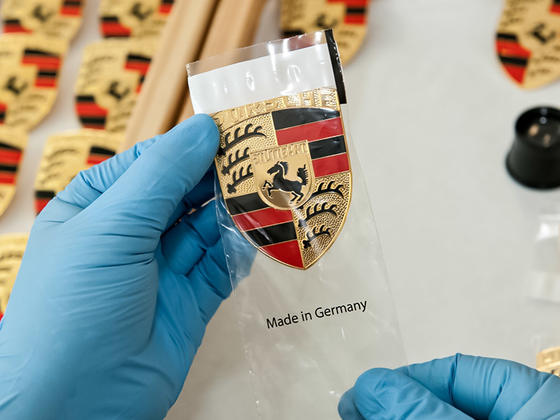 7.  Quality control
How Did Porsche Get Its Emblem?
Porsche Automobil Holding SE was started in 1931 by Czech engineer Ferdinand Porsche after he had been commissioned to design automobiles for other companies.  The company’s headquarters have remained in Stuttgart, a city located in southwest Germany that was built on a stud farm (a term for a horse-breeding farm, so “stud garden” in German is Stutt Garten, or Stuttgart).  The city, founded in 950, has been the capital of the state of Baden-Wurttemberg.
Initially, there was no symbol on Porsche’s cars, only the automaker’s name – that’s certain.  What isn’t agreed upon is how the crest originated.
North Americans contend that in 1951, Ferdinand Porsche’s son Ferry met with American Porsche distributor Max Hoffman at a New York restaurant.  Hoffman suggested the automaker needed a symbol or mascot, which Ferry sketched onto a napkin.  After bringing the design back to Germany, Ferry had it polished up and put on the company’s cars.
However, Germans contend that the Porsche logo was designed by engineer Franz Xaver Reimspiess, who worked with Ferdinand at his request to make a lasting company emblem (previous to his death in 1951).  No American-suggested napkin drawing ever happened.
Either way, the first Porsche badge appeared in 1953 on the horn button and a couple years later on the front of a 356 Coupe.
What Does the Porsche Logo Represent?
The Porsche emblem, which has the appearance of a coat of arms and is popularly known for being copied by Ferruccio Lamborghini, is inspired by two designs.
The rearing black horse in the center is from Stuttgart’s coat of arms, also called its city seal, which has included horses in its designs since the 14th century.  Not only was this a homage to where the company was based and returned to life after hiding in Gmund during WWII, Porsche sees the wild animal as an expression of the company’s forward-thrusting power.  Porsche’s horse is a bit more dynamic, with thinner legs, a raised head, and flowing hair.

The antlers and the red/black stripes are taken from the state crest of Wurttemberg, where Stuttgart is located.  As for the colors:

Apart from smoothing out some edges, not much has changed in 60 years.  The original crests can still be ordered through Porsche centers and are hand-made in Germany.