The New Porsche 911 A Design Icon

Porsche presented the 8th generation of the 911 in Petree Hall at the Los Angeles Auto Show. 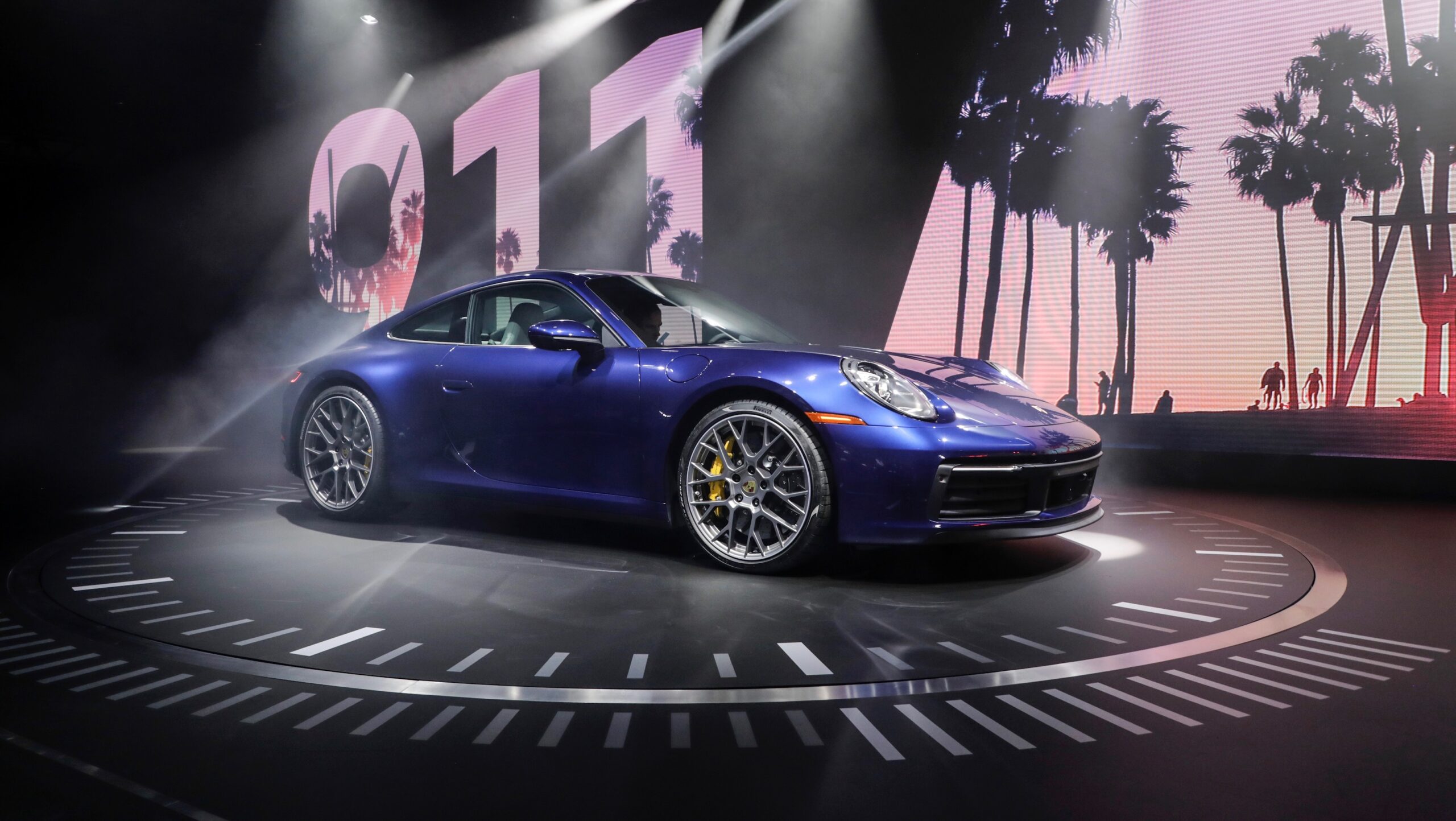 “California is the ideal place to introduce the new 911. California has been like a second home to Porsche for decades,” comments Oliver Blume, CEO of Porsche AG. “The 8th generation of the 911 is even more powerful, even more emotional, and even more efficient than its predecessor – and also offers extensive digital features. And in spite of all the innovations, the 911 is still just what it has always been: a pure sports car and the pulsing heart of Porsche: our icon.”
Unmistakably committed to the Porsche design DNA, with a much more muscular look and an interior featuring a 10.9-inch touchscreen monitor, the new 911 is timeless – and also modern. Intelligent control and chassis elements as well as innovative assistance systems combine the masterfully uncompromising dynamism that the classic rear-engine sportscar is famed for, with the demands of the digital world.
The next generation of flat-six turbocharged engines has been further developed and is more powerful than ever before, with 331 kW (450 PS; 911 Carrera S: Fuel consumption combined 8.9 l/100 km; CO2 emissions combined 205 g/km; 911 Carrera 4S: Fuel consumption combined 9.0 l/100 km; CO2 emissions combined 206 g/km) in the S models. The drive efficiency has been increased by way of an improved injection process and a new layout for the turbochargers and charge air cooling system. The power is delivered by a newly developed eight-speed dual-clutch transmission. The top speeds are now 308 km/h (Carrera S*) and 306 km/h for the Carrera 4S all-wheel-drive version. Additional highlights include Porsche Wet mode to make driving on wet roads even safer, Night Vision Assist with thermal imaging camera, as well as comprehensive connectivity that uses swarm intelligence. The offering is completed by three exclusive digital services that are a perfect fit for the Californian lifestyle: the Porsche Road Trip app for extraordinary journeys, the Porsche 360+ personal assistant, and the web-based Porsche Impact emissions calculator for neutralising your individual carbon footprint.
Detlev von Platen, Member of the Executive Board for Sales and Marketing at Porsche AG, emphasised the importance of the US American market for the sports car manufacturer: “More than 55,000 Porsches were delivered to the USA in 2017, and our American sales company Porsche Cars North America is on track to achieve a new record figure in 2018. Ultimately, no model better symbolises the American love affair with Porsche than the 911. One in three Porsche 911s built in Zuffenhausen goes to the USA.” 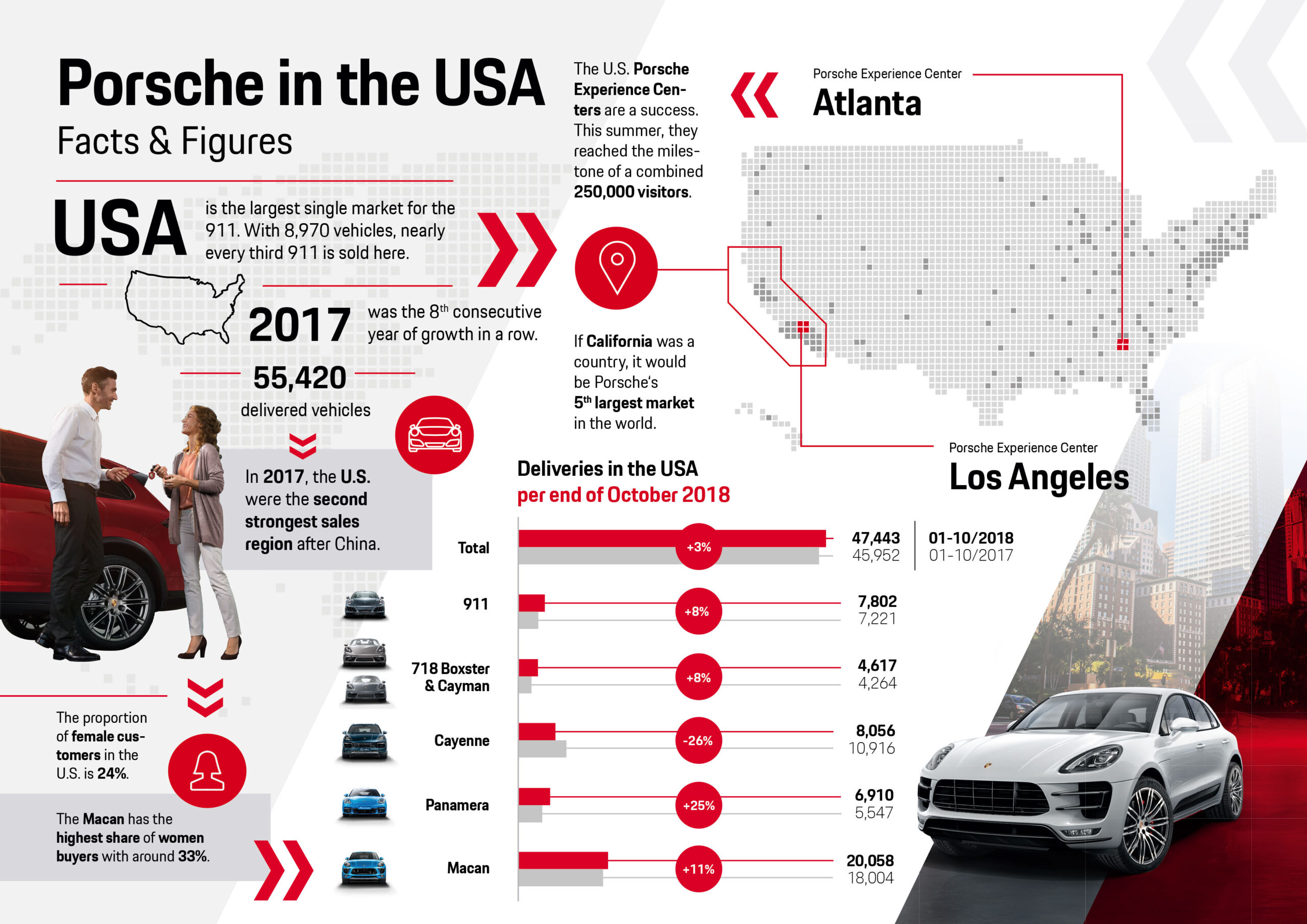 An exterior design that draws on earlier generations of the 911
The exterior design is familiar and yet unmistakably new. The eighth-generation 911 is wider, more assertive, and more advanced. Wider wings arch over the large 20-inch wheels at the front and 21-inch wheels at the rear. The rear-wheel-drive models now match the bodywork width of the existing all-wheel models. Their rear body is 44 mm wider. The front end of all models – now 45 mm wider – revives a traditional feature of earlier 911 generations: a forward-extended bonnet with a distinctive recess in front of the windscreen. Both elements lengthen the front of the vehicle and give it a dynamic look. At the same time, the newly developed LED headlights illustrate how technology has advanced in the 911. These headlights are integrated into the wings almost seamlessly, taking the typically-911 round and upright form. Flush integration of the electrical pop-out handles in the doors emphasises the tapered and smooth side contour. The exterior mirrors have also been redesigned, and are now optimised to minimise wind noise. It’s also possible to fold the mirrors in electronically.
The rear of all models is dominated by the significantly wider, variable-position spoiler and the seamless, elegant light bar. The vertically arranged louvres of the air intake echo the contours of the rear window. The centrally located third brake light has also been integrated in the intake louvres. Since this is hidden when the rear spoiler is extended, there is a second brake light in the spoiler itself. As a distinguishing feature, the rear-wheel-drive models have black louvres, while the all-wheel-drive models have chrome elements in the rear grille. With the exception of the front and rear sections, the entire outer skin is now made from aluminium.
Redesigned interior with clear lines
The interior is distinctive, with the clear, straight lines and recessed instruments defining the dashboard. The 911 models from the 1970s provided the inspiration here as well. As it does in the original 911, the new dashboard covers the entire width between two horizontal wing levels. Alongside the centrally positioned rev counter, two thin, frameless freeform displays deliver information to the driver. Now 10.9 inches in size, the centre screen of the Porsche Communication Management (PCM) can be operated quickly and without causing distraction. Below it, a docked-on control panel of five buttons with the look of a classic toggle switch creates the transition to the centre console with touchpad. The seats have also been fundamentally modified. The new design reduces the vehicle weight by around three kilos, while the adapted geometry offers significantly better lateral support in the shoulder area. Although the seat is now positioned five millimetres lower and has a minimally thinner seat cushion, seating comfort has been improved overall.
In the area of digitisation, the 911 takes the next step into the future with permanent connectivity, as well as new functions and services. The standard PCM features include online navigation based on swarm data as well as Porsche Connect Plus. 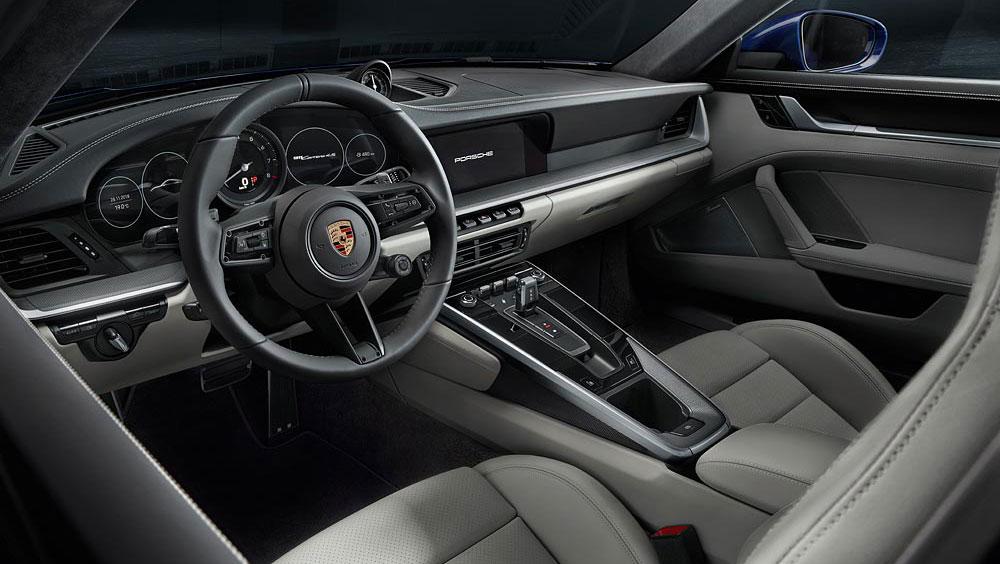 New assistance systems enhance safety and comfort
In a world first, Porsche has developed Wet mode, included as standard. This function detects water on the road, preconditions the control systems accordingly and warns the driver; the driver can then adjust vehicle settings for a particular emphasis on safety at the push of a button, or by means of the mode switch on the steering wheel (optional Sport Chrono Package). The camera-based warning and brake assist system, also fitted as standard, detects the risk of collisions with other vehicles, pedestrians or cyclist and initiates a warning or emergency braking if necessary. Night Vision Assist with a thermal imaging camera is optionally available for the 911 for the first time. The adaptive cruise control option includes automatic distance control with stop-and-go function and reversible occupant protection.
The next generation of flat-six engines
The turbocharged flat-six engines also enter a new generation with the new 911. In addition to compliance with the latest emissions standards by way of a gasoline particulate filter, the primary focus of advanced development here was on further enhancing performance. New, larger turbochargers with symmetrical layout and electrically controlled wastegate valves, a completely redesigned charge air cooling system, and use for the first time of piezo injectors combine to attain engine improvements in all relevant areas: responsiveness, power, torque characteristic, endurance, revving ability. In addition to performance enhancement of 22 kW (30 PS), achieving 331 kW (450 PS) at 6,500 rpm, the 911 Carrera S engine achieves an extra 30 Nm of torque: 530 Nm in total. This is available within a wide range of speeds, from 2,300 to 5,000 rpm.
The Porsche 911 mythology, right on the wrist
Porsche Design is honouring the new generation of the 911 with a special-edition watch limited to 911 pieces: the “911 Chronograph Timeless Machine Limited Edition.” 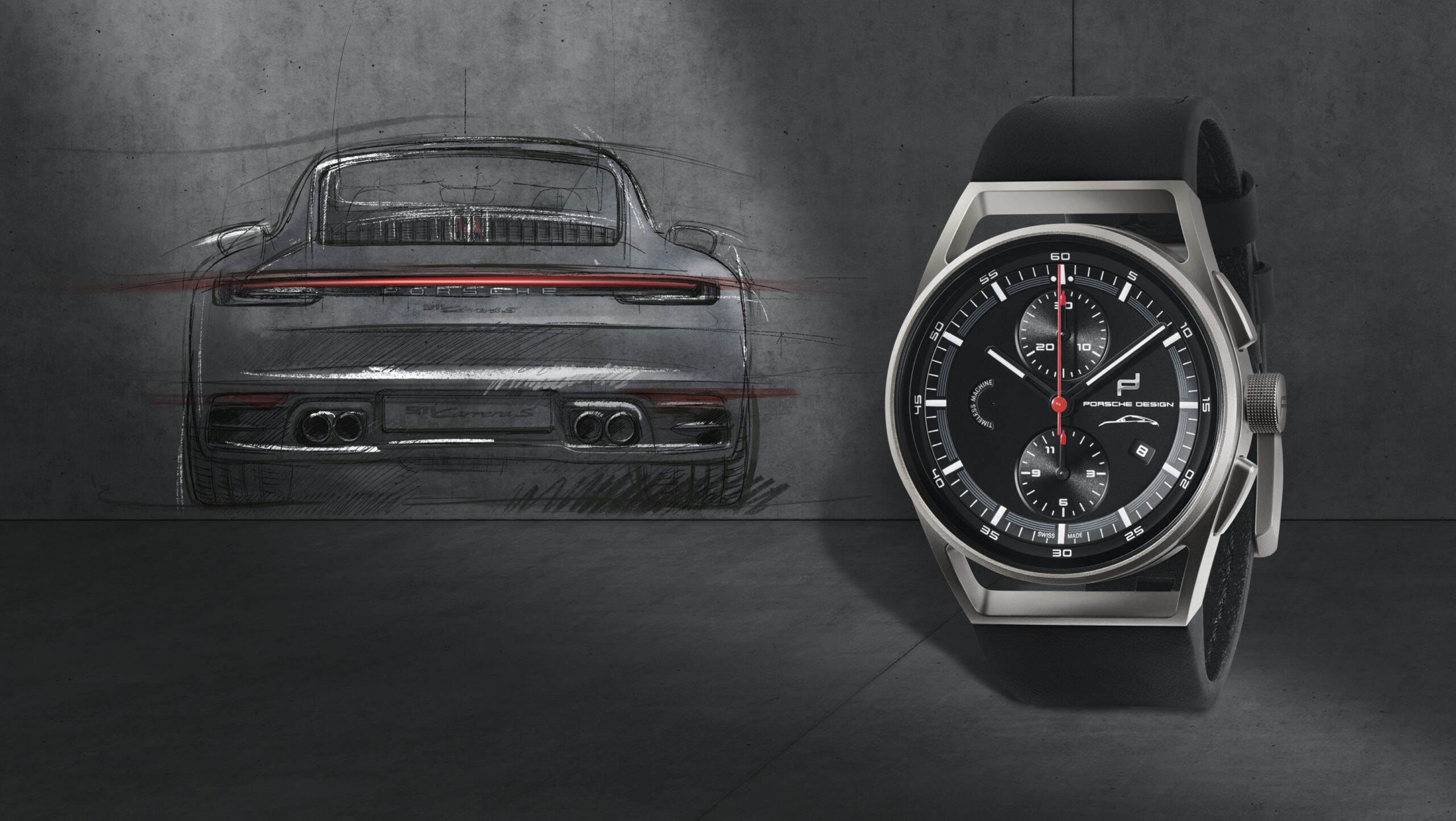 The unmistakable design of the automotive icon is reflected in the puristic design of this timepiece and the contouring of the titanium housing. Even the generously dimensioned black dial is derived from its motorised forerunner. The white pointers and indicators guarantee maximum readability both in the cockpit and on the wrist. The totalisator at 6 o’clock references the sports car icon with the markings at 3/6/9 and 11. The same is true for the silhouette of the 911 flyline on the dial, and the strap that is produced using original Porsche interior leather. The special edition will be available from April 2019 in an exclusively boxed edition which also includes a special limitation badge.
The previous seven generations
The original 911 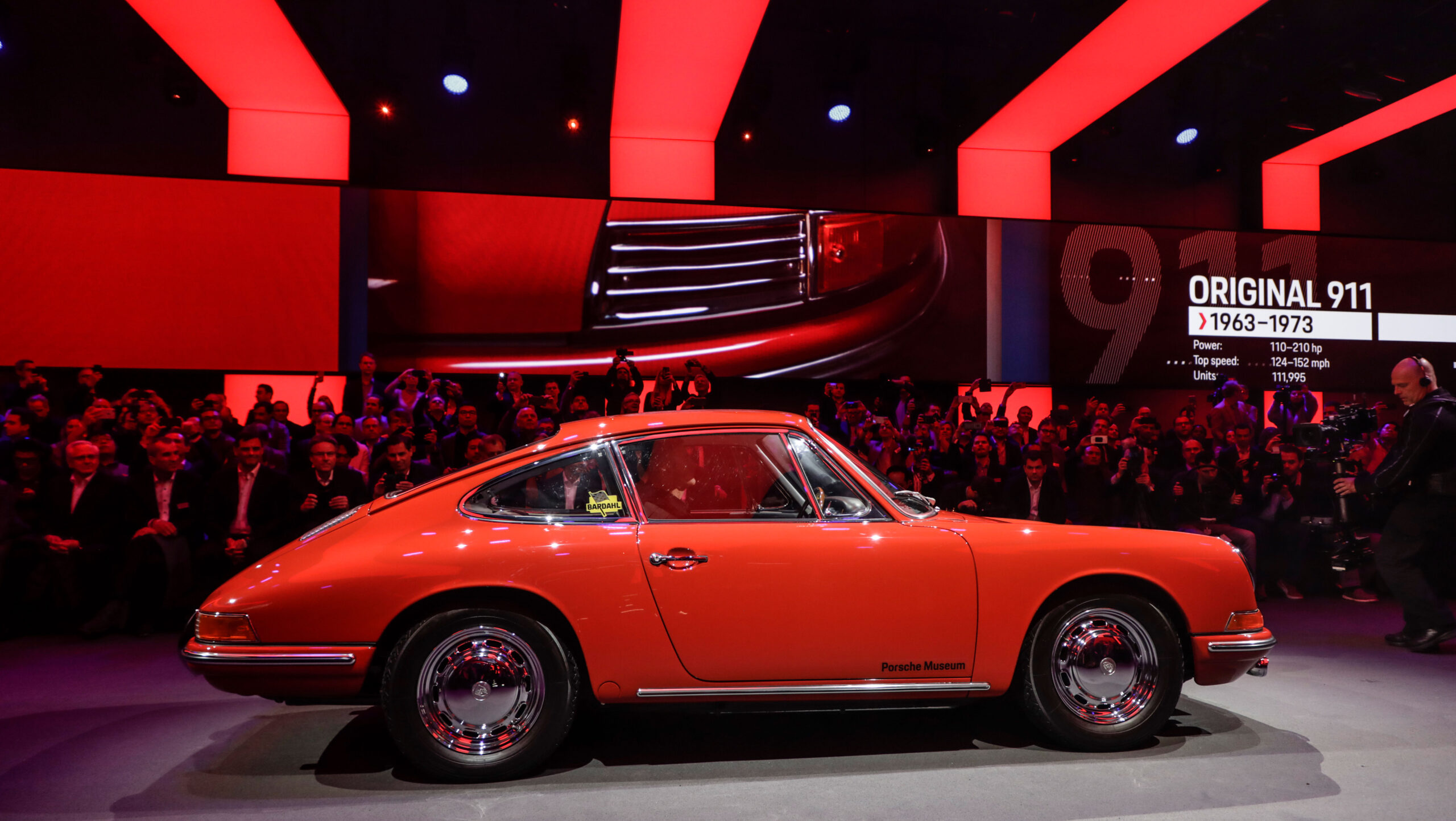 A legend was born at the International Motor Show Germany (IAA) in Frankfurt. It’s 12 September 1963: Porsche presents the hotly anticipated successor to the 356 – a sports car which 15 years previously had started this car manufacturer’s brand history in Gmünd, Austria. 111,995 examples of the original 911 – initially called the 901 – are built before the model is discontinued.
The G series 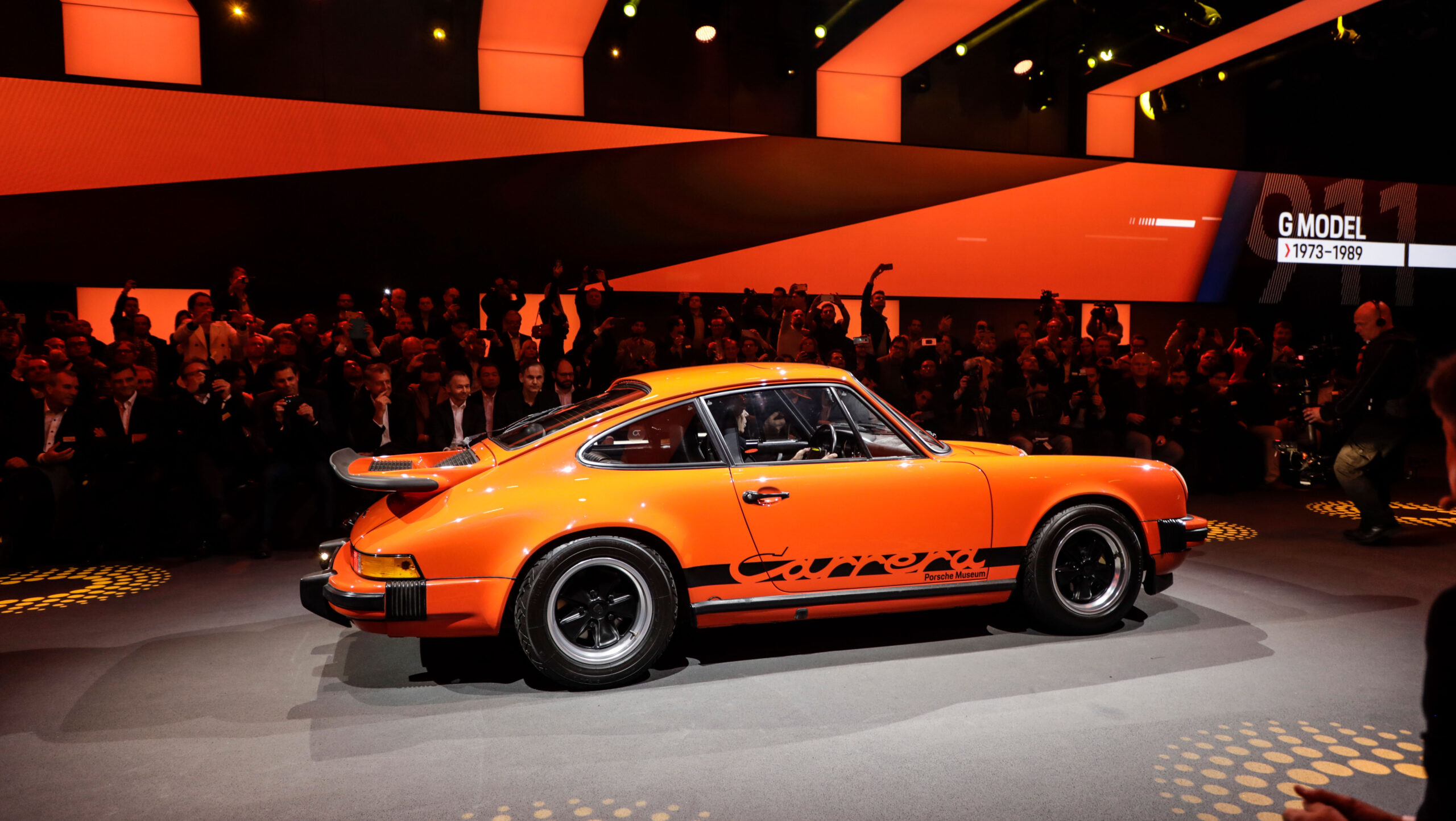 Ten years later, in 1973, the G series 911 is launched with fundamental changes. Many of these have become necessary because of stricter safety specifications in the USA – an important export market. The Stuttgart-based car manufacturer relies on powerful turbo engines and a galvanised body in its top model, additionally launching a Cabriolet version of the 911 and the Speedster, alongside the Targa. 198,496 Porsche 911 G Series are built by 1989.
Type 964 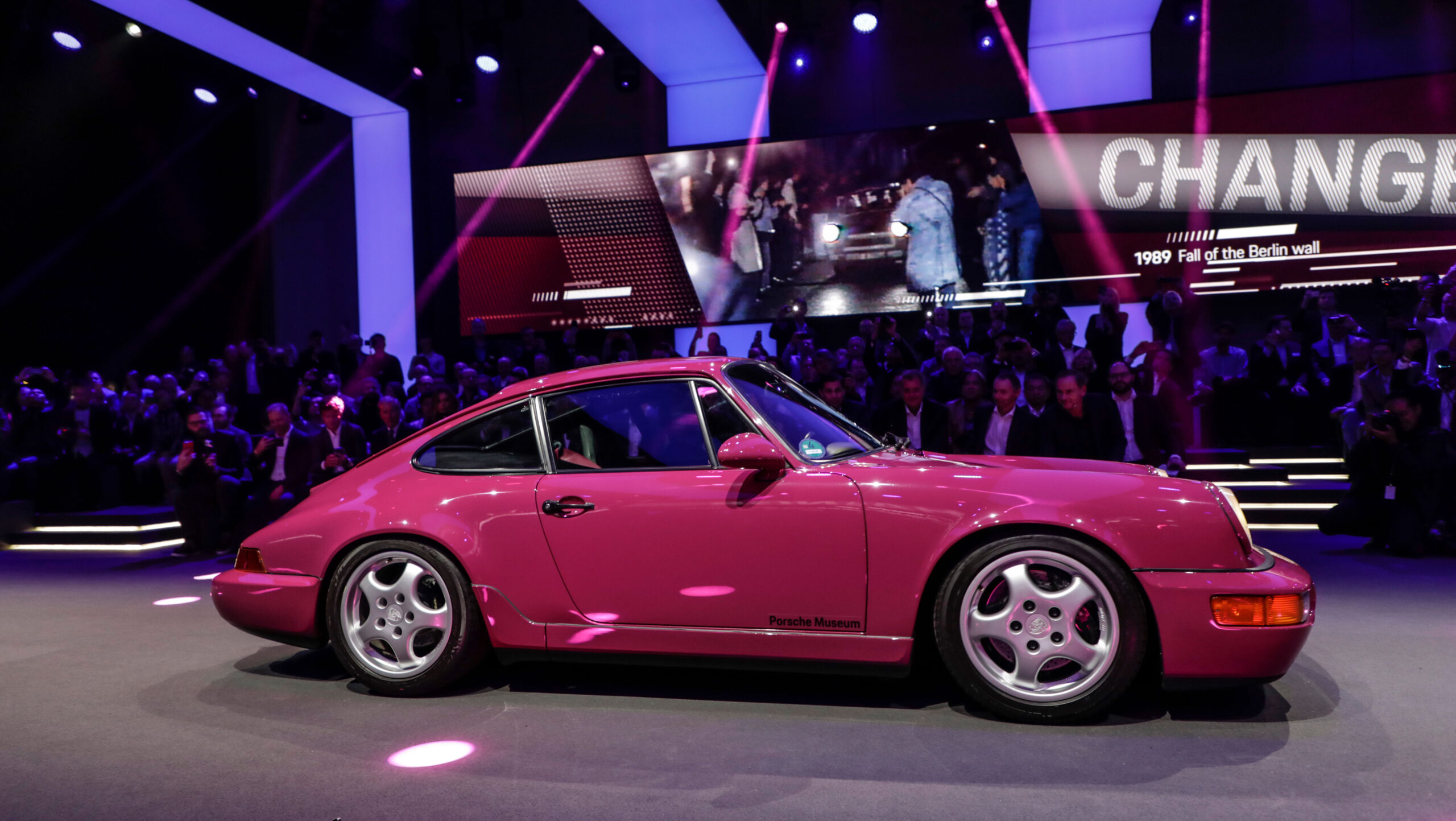 Its successor, referred to internally as type 964, comes to market in 1988. The first model variants of the 964 generation show just how advanced the new 911 is: the all-wheel drive is introduced to the series for the first time on board the Carrera 4, with Porsche having originally designed it for the 959 high-performance sports car. The 911 Carrera 2 with rear-wheel drive follows in 1989. Along with the Coupé, the Cabriolet and Targa versions also celebrate their debut at the same time. For all versions it’s true that, beneath the trusted bodywork – barely modified apart from integrated bumpers – 85% of the 964 is made from newly designed parts. From October 1993, after 63,762 third-generation Porsche 911s are produced within six years, the new successor is ready.
Type 993 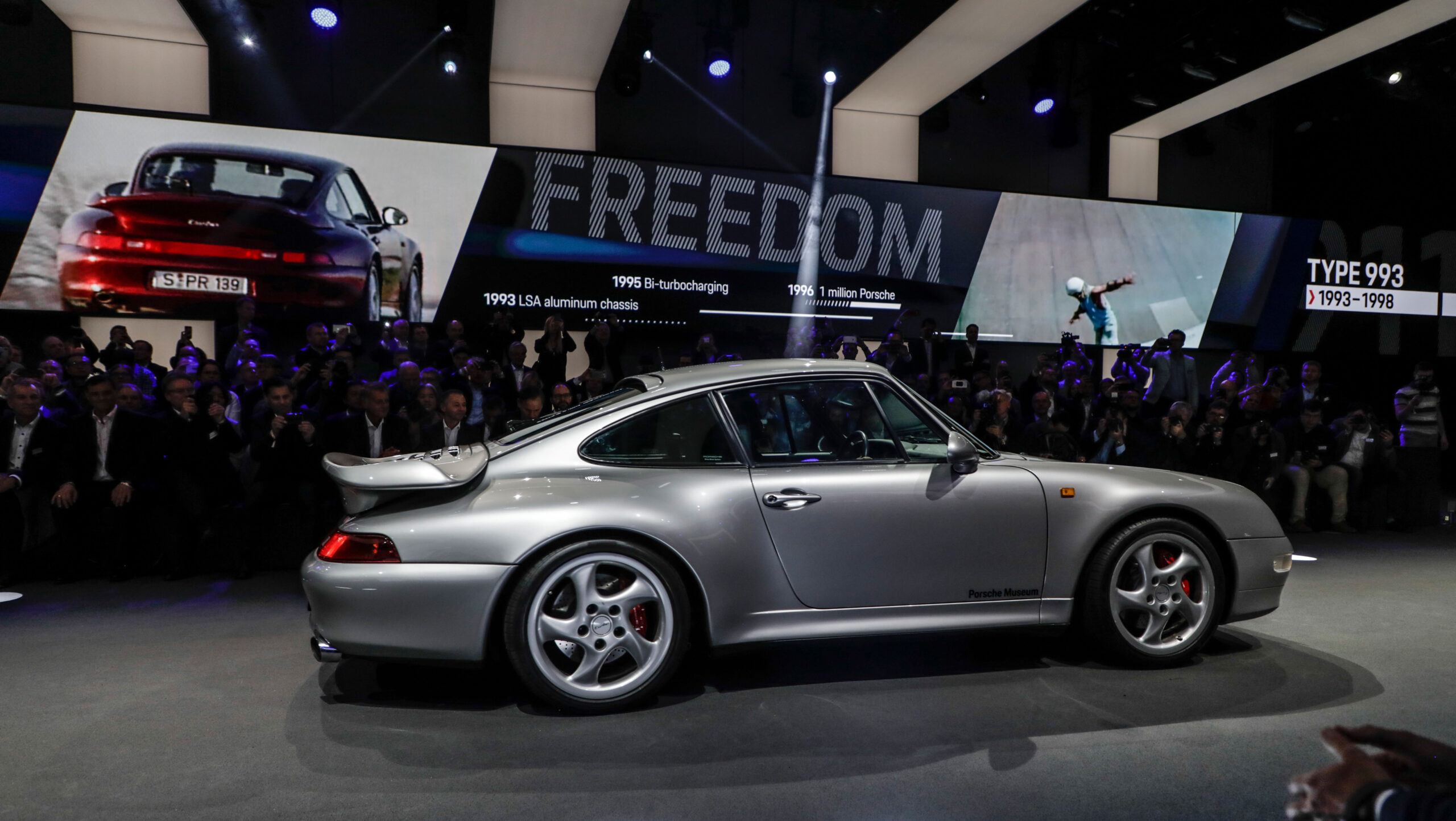 The fourth generation of the 911 – the type 993 – is one of the most desirable editions. Initially, Porsche offer it only as a Coupé and Cabriolet. The Targa does not make its debut until 1995, at which time it arrives incorporating a new concept: instead of a removable hardtop, it has a glass roof with a large surface area, which can be descended under the rear window. The chapter of air-cooled engines also ends in 1998 after the production of 68,881 vehicles.
Type 996 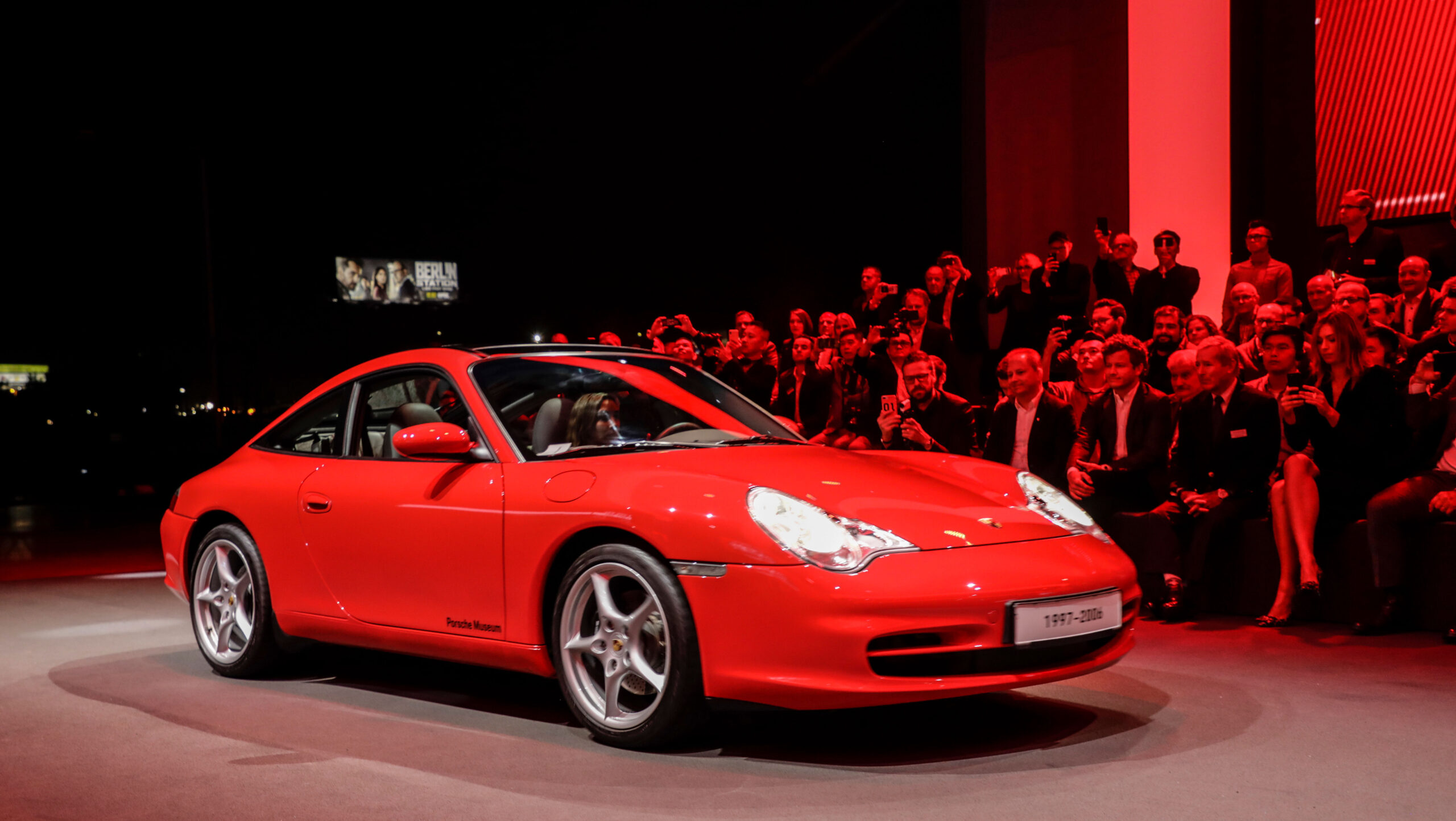 With the fifth generation of the 911, Porsche stops using air-cooled engines – already starting in 1997. The type 996 represents the biggest departure in this classic’s family tree. The company is in a state of financial upheaval. After 34 years, the sports car manufacturer comprehensively realigns its icon with the 996 generation. The focus is on reducing production costs – a process started in the model’s predecessor, by ensuring the greatest possible compatibility of parts with other production series such as the new Boxster, and updated safety and emissions specifications, among other initiatives. Production doesn’t end until 2005. With 175,262 units sold, the 996 is the long-underestimated success model in the more than 40-year history of the 911.
Type 997 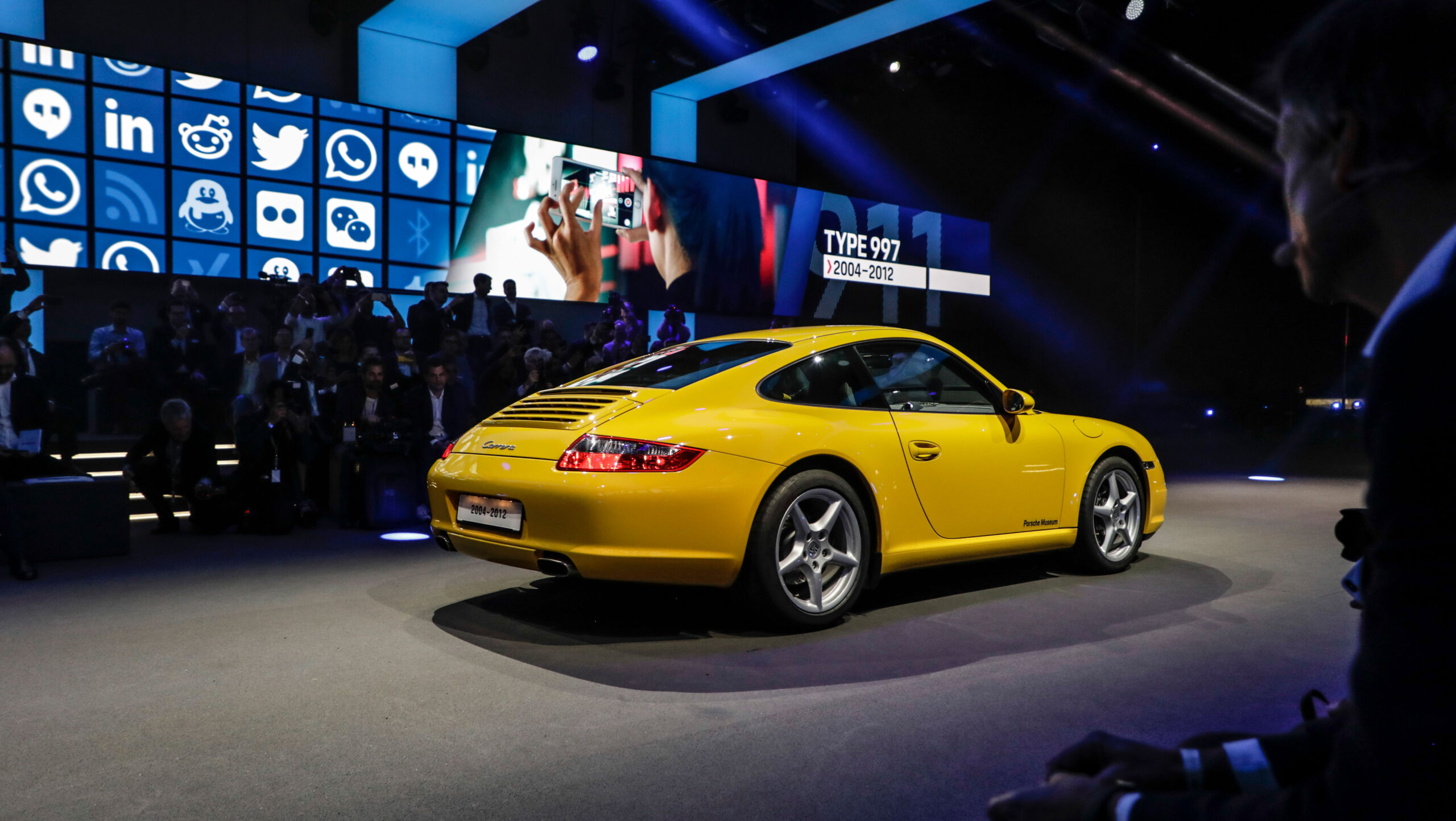 From 2004, the type 997 Porsche 911 is more multifaceted than ever: customers can choose from a Coupé or Targa, Cabriolet or Speedster, rear- or all-wheel-drive, narrow or widened bodywork, with water-cooled aspirated and turbo engines, a GTS or the GT2, GT2 RS or GT3 sport versions, or either of two GT3 RS models. Including special models, the range has a total of 24 model variants – supplemented by a wide range of personalisation options. With 213,004 vehicles out there, the sixth generation of the 911 again hits a production record.
Type 991 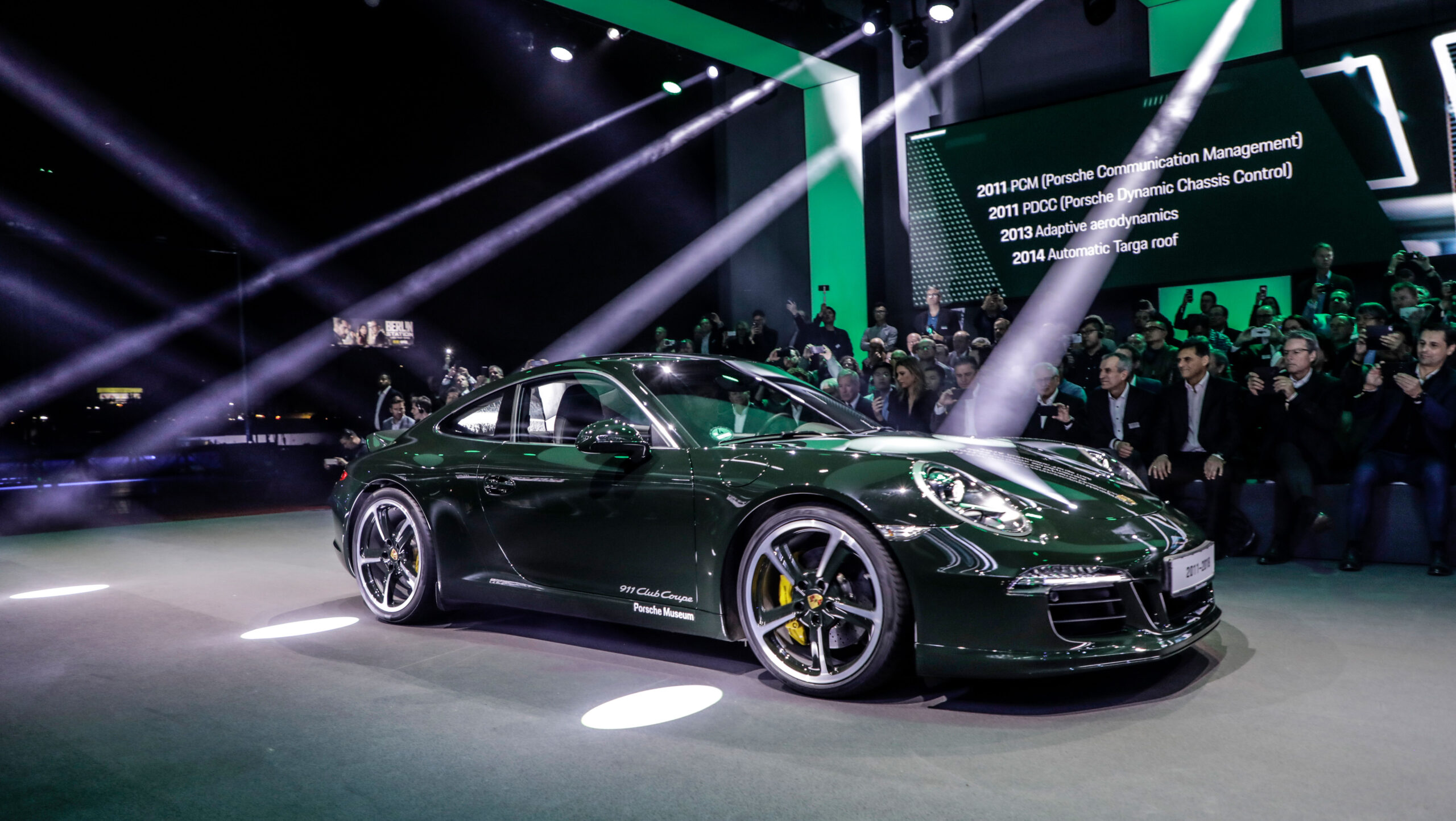 From 2011, the 991 embodies the highest development stage of the Porsche 911 to date. It is an extraordinary reflection of this sports car manufacturer’s leitmotif: striving for the best possible efficiency. This can be seen in all aspects, starting with its evolved design. A more compact silhouette, tension-charged surfaces, and precisely defined details mean the 991 looks more powerful than any other previous 911 – an effect that is heightened by the wider track and the wheelbase that has been extended by ten centimetres. It also features adaptive aerodynamics: the 911 is the first series sports car from Porsche to adopt these from the 918 Spyder hybrid supercar. The 991 generation of the 911 is the absolute best seller in the history of this icon. 217,930 of them were built by October 31, 2018. In total, Porsche has produced 1,049,330 series 911s since its debut in 1963.